I know, I'm behind in my jquery plugin announcements, so I'm going to do three in one. 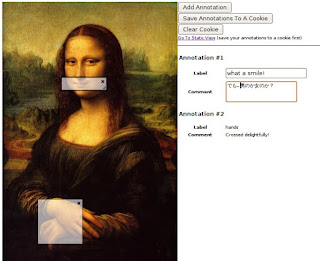 First up is annotator, for annotating an image (or anything):
http://dcook.org/software/jquery/annotator/

You can have any number of annotations, can drag them anywhere, and can resize them. In the default mode each annotation has a text box appear underneath it for adding a comment.

New in version 0.3, and shown in the screenshot to the left, are some hooks for attaching a form to each annotation, so you can create a custom form for each one (or any other idea you have)!


Next up is selector_aspect, which is for selecting part of an image while maintaining a fixed aspect ratio. E.g. useful for cropping an image.
http://dcook.org/software/jquery/selector_aspect/

A simple straightforward plug-in, with not many options.

Third is get_percentage_position, which is used to get the size of one div (or any DOM position) in terms of another div (or any DOM object), and also to get the relative position in the same terms. Not very glamorous, but useful in conjunction with the selector_aspect plugin, for instance. It is available here:
http://dcook.org/software/jquery/get_percentage_position/

Finally, a reminder that my first jquery plugin, to run a magnifier over an image is introduced here:
http://darrendev.blogspot.com/2010/04/jquery-plugin-image-magnifier.html

and all my jquery plugins are being kept here:
http://dcook.org/software/jquery/
Posted by Unknown at 2:37 AM