For many people, WebGL is a technology for making browser-based games, but I am more interested in all the other uses: data visualization, data presentation, making web sites look fantastic, new and interesting user experience (UX), etc. (I have spent many years using Flash for similar things.)

WebGL is an API to allow browsers to use a GPU to speed up 2D and 3D graphics; you write in a mix of JavaScript and a shader language. Because it is low-level and complex I recommend against writing in raw WebGL; use a library instead.

It is supported on just about any popular OS/browser combination, including working on tablets and mobile phones. Your device does not need to have a dedicated GPU to run WebGL.


What libraries are there?

There are actually quite a few choices, but for this article I will focus on the three libraries I have made (non-trivial) WebGL applications with:
The first two are fairly low-level (Babylon.JS has a few more abstractions built-in), meaning you will be thinking in terms of vertices, faces, 3D coordinates, cameras, lighting, etc. A 3D graphics background will be useful. Superpowers is higher-level, but more focused on games development. Some Blender (or equivalent) skills will also come in handy, whichever library you go for.


Three.js And Its Resources 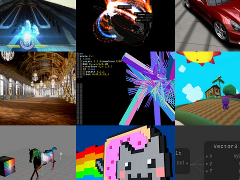 Three.JS is the most established WebGL library, with some published books, many demos (http://threejs.org/, https://stemkoski.github.io/Three.js/ and others), even a Udacity course.

However it has scant regard for backwards compatibility, meaning that frequently the code in the published books (or the source code of older demos and tutorials) will not work with the latest library version. It has a relatively aggressive developer community, who think that having an uncommented demo of a feature counts as documentation.

It uses the MIT license (the most liberal open source - fine for commercial use), hosted on github; bug reports to github, but support questions to StackOverflow’s [three.js] tag.


Babylon.js And Its Resources 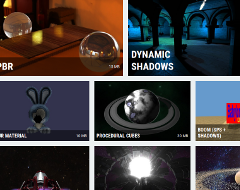 Babylon.JS is now two years old, and was developed at Microsoft in France, though it is open source (Apache license, so fine for commercial use). It is primarily intended for making games, but is flexible enough for other work.

Like Three.JS, it has plenty of demos, and again they are often undocumented. There is an active web forum; explanations and experiments there often link to the Babylon Playground, which is a live coding editor. There is also a very useful eight hour training video course (free), presented by the two David’s who created Babylon.JS. (There is a just-released book, https://www.packtpub.com/game-development/babylonjs-essentials, but I’ve not seen it, so cannot comment.)


Superpowers And Its Resources

Superpowers is a bit different: it is a gaming system, with its own IDE. It is very new, only released as open source (ISC license, which is basically the nice liberal MIT license again) in the middle of January 2016, though appears to have a year’s closed development behind it. (The IDE is cross-platform; it has been running nicely for me on Linux, I’ve not tried it on other platforms.) Some of the initial batch of demos and games have been released on GitHub (kind of as open-source - the licenses are a bit vague, especially regarding re-use of assets), which has been my main source of learning. A few tutorials have also appeared recently (GameFromScratch.com, and https://itch.io/board/11494/tutorials-guides).

What grabbed my attention was the quality and completeness of the Fat Kevin game, combined with the fact that I could download all source and assets for it, to learn from. (The Discover Superpowers demo is similar, but simpler, so easier to learn from.)

Support is through forums on itch.io, with separate English and French sections. This requires yet another user account; I find it a shame they didn’t use StackOverflow, Github, or at least HTML5 Game Devs (as Babylon did). I’d not heard of itch.io (“an open marketplace for independent digital creators with a focus on independent video games”) before, but I think their choice tells you how they see Superpowers being used.

The coding language is TypeScript, basically JavaScript 1.8 plus types; it is worth specifying those types, as then the IDE’s helpful autocomplete can work. Note that Superpowers is closely tied to the IDE - you need to be clicking and dragging things; doing everything in code is not realistic (though this might just be the style of the initial few games). Superpowers is built on Three.JS, but I’m not seeing anything exposed, so I don’t think you can take a Three.JS example and use it directly.

Which library to choose? I suggest you try out the demos for each of these, and choose the library that has demos that cover all the things you want to do. If the choice comes down to Three.JS vs. Babylon.JS, and you cannot find a killer reason to choose one over the other, this is because it doesn’t really matter, they can each do 95+% of what the other can: follow your hunch, choose one or the other, and dive in and learn it.

Finally I should say that WebGL for website development is hard: your programmer(s) will need 3D experience, as will your graphic designer(s). If you are using RWD/mobile-first to target both mobile and desktop, it is even more complex. My company, QQ Trend Ltd. can help (contact me at dc [at] qqtrend.com).
Posted by Unknown at 1:58 AM